rain would always make me ponder

i’ve been sitting on an ergo chair for already about 15 minutes.

the sky angry with thunder after a forked light flashes and then began showering its kernel-sized droplets of condensed water vapor.. all the lights off and power completely gone out. children at the neighborhood were happily bathing themselves as the water fell and overflowed from the gutters and roofs; all of them were merry. their hollers commingled  with the cloud of haze. i could see them through the semi-frosted sliding glass window, which i would wipe every so often, celebrating the bounty of the collapsing heap of grey.

the adults would usually rant when rainy days stayed longer than predicted: a weather disturbance—as what the weather guy usually calls it—shorn all our planned agenda. but sometimes, sometimes in our most solitary moments we appreciate the rain and its unexpected splendor, hiding everyone’s faces by the spray as the pomp splattered all over the ground washing away every journey’s trail. and the constant sound of the falling enchanting to the ears,  hammering every roof.

i remember  i was very young  when i would ask mom to let me play with the other kids in the rain. and so i was with them the next thing; then i became a friend to everyone; and we ran and ran—and all, as far as i could think of, were merry.

it was raw happiness. how life’s simplicity that time turned to be exciting; the kind i didn’t get to experience again as we were growing up.

but change was always there. how the recent life got in the way and robbed those days’ merriments, the innocent memories that resonated. the simple pleasures and shallow happiness had flung somewhere in time. everything turned complicated when all new priorities set in and piled up and i get to disremember the little effortless things we usually enjoy..

and then i’m still here, been sitting on an ergo chair for already an hour wishing things would be the same as it was: when life came to be happy after bathing in the rain, when everything’s really not everything we currently now have, how there’s contentment with having barely enough, and how the weight of the world still imperceptible. it’s incongruent how has time made the world so small, yet everyone (& everything) around, is a complete stranger.

Dark clouds came
utterly quiet,
unvoiced.
Its dumb overcast
expanding in full
swell;
On what appeared to be
a warm arid
day,
rain fell heavily
all of a sudden
and prolonging this crippling feel—
that I can never contain…
Thunder a yelling
on an utterly quiet
daytime.
—When Dark Clouds Stayed Longer, bender 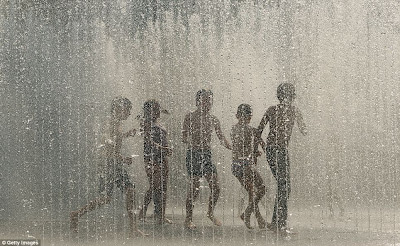