have you heard of these?


i’ve been venerating men with such high regard, well, the least i could through this blog. but should it be different this time say, i’m gonna do the opposite by debunking some of their secrets and pointing out on these peculiar products made for them. come on guys don't get embarrassed there clearly has a market out there!

peculiar did i say? oh, i must mean sidesplitting! from fart pads and bulge enhancers to premature ejaculation creams? are you kidding me? who could find a better term for uproarious? it’s for you to say it loud. and yes i'm trying to poke fun at you!


who says concealers are only for girls? no one is excluded to having gigantic zits and breakouts not even among men. but thanks to this foray into men’s beauty products, dudes can now dub on the makeup and they’re good to go. com’on, wearing makeup doesn’t make you gay does it? 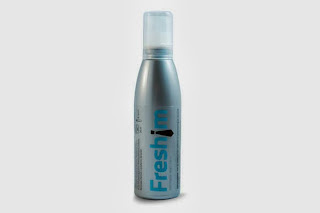 
from the name itself, you guys should not think just a shower will do. this pocket-sized handy dandy spray may do the trick when the chance for some action can...uhm, pop up when you least expect it? it’s formulated with vitamins and aloe which promise to enrich the skin of your tool at times when it needs extra care. as the company points out "Because You Never Know!" i never knew there exist such a product but  this is a must have! wink!


Weener Kleener
ring toss! penis hula-hoop! the possibilities for fun are endless! personal hygiene has never been as stimulating! 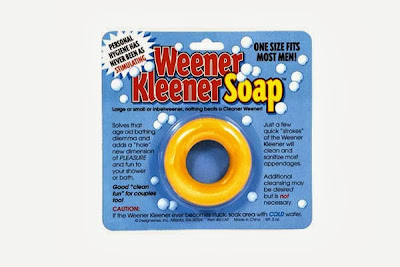 
when would something like this come in handy? when you’re halfway on a trip and realized that you forgot a change of intimates? or your terror boss suddenly calls you out on an error you made to a report a minute before his meeting and you suddenly need a quick change? am even having a hard time figuring out how to use this as it looked weird for an underpants. Valda Pastilles anyone? 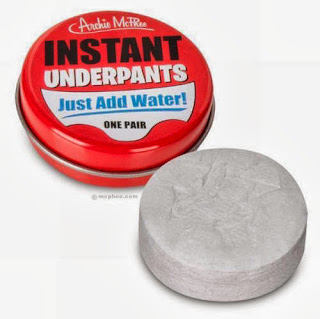 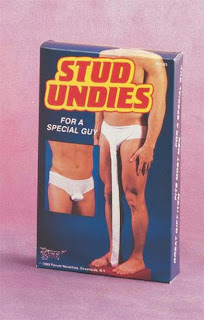 Stud Undies
okay, where can you find an underwear that has a sack & rolls like an anaconda? well, size really matters at least for this undie. but how about those who are not so well-endowed? at least it’s got plenty of room for shortie. it says it comes with a VHS copy of the Jennifer Lopez/Ice Cube-starring film, and a collection of male testimonies claiming they may be single, but dammit if they don’t feel a newfound confidence within themselves. you kidding me?


obviously this energy drink is marketed towards ahem...who else? but who would care if a straightie wants to try? while some refer to it as a “graphite smoothie”, this drink is similar to Red Bull except for its bright pink color and flavor and the packaging too which is so..gay. its makers claimed Gay Fuel contains a blend of sexual stimulant herbs and immune system boosters that no wonder they use a slogan “GET FIRED UP.” oh! 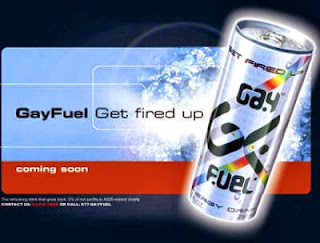 Jingle Jugs
are you sick of those boring deer heads stuck to your wall? lucky for you there is now an alternative! Jingle Jugs can be mounted on any wall and will provide years of pleasure to the man who has no girlfriend or wife, or at least a gay lover. now that’s distressing. 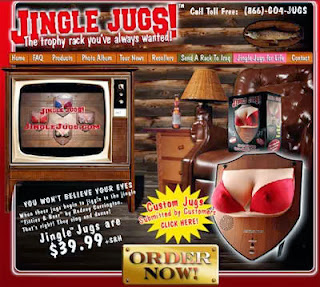 Giant Remote
it’s just a basic remote control but what’s with the size? you might be asking. it is made to avoid losing your remote control which is a common problem. who could ever lose such when it’s as big as you? you can also use it as your bed, sofa base, or as a center table. okay, that’s a bit stupid. but i’m wondering how big the batteries could also get, any idea? 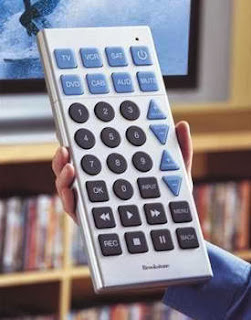 
where most women make every effort to stuff-in some pads for their boobs to look, well, healthy, i never thought men too also decidedly become more keen about reminding the world they are “gifted”. while bulge-enhancing underwear is the equivalent of your balls moving into a mansion, there is surprisingly no room in there for anatomical precision. most of the packages on these briefs look less like actual dongs and more like one of your ass cheeks got lost on the front of your body. they are such ridiculous lumps that any woman (or woman alike) with rudimentary knowledge of male genitalia should absolutely be apprehensive for the health of the wearer. at the risk of getting too graphic, some of these brands don't care that the base of most wigglies isn't directly below the belly button. so that’s the secret to your well-endowment huh? dammit! 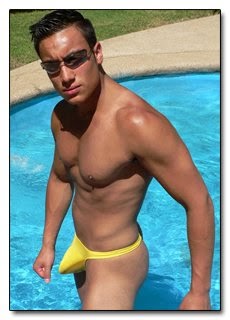 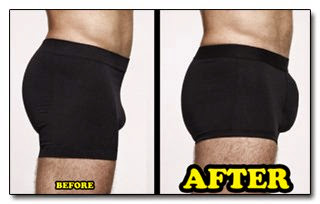 ManDelay Premature Ejaculation Cream
second only to outright impotence, premature ejaculation is a major sexual dysfunction that is no laughing matter. okay, it’s a little funny, but only when it happens to other people, not you. one of the most effective ways to treat the problem is to reduce the amount of stimulation that the penis receives during sex. you can recite batting averages all night long, but a few minutes in the Tunnel of Love can undo all of your mental gymnastics. apply a bit of this cream before you get busy and you’ll be improving your slugging stats into big league territory. 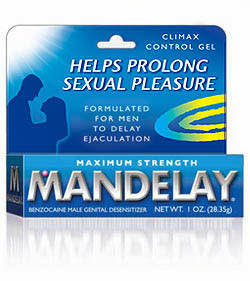 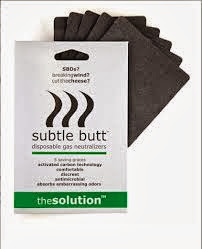 Subtle Butt
while this doesn’t work like a gun silencer, at least the sound of a bed sheet being ripped in half gives those in the danger zone a fighting chance of escaping in time, while a silent but deadly brings only quiet death. but not necessarily. this works as a fume-absorber thus eliminating residual air.
for me to use these fart pads would be like taking music away from Mozart, taking basketball away from LeBron, or golf away from Tiger Woods. why would anyone want to remove some people's greatest talents? but who is the real victim here, the people gasping for non-methanized oxygen, or the poor soul who suffers the humiliation of being called a human waste dump?

stand up, for love

it is indeed very terrifying to fight for what you believe in and stand to it specially when the world thinks otherwise. it's not about religion or whoever one chooses to believe it's more of faith, it's not about category but equality, preference but identity & acceptance & living a life far from the guilt of lying, denial and self-deprivation. people may look down on you, disown you yet when they see that you are sincerely happy of who you are they'll eventually accept you, and that there's nothing more pleasant in this life than being at peace with yourself and being comfortable under your own skin.

so to the people who chose to stand up for what they believe is right, gay or straight, i have much respect for you. THANK YOU for making a statement and showing the world it is not a thing to be ashamed of. and thank you for letting us feel your acceptance & for being such decent human beings. we hope that in the future people will follow your lead. 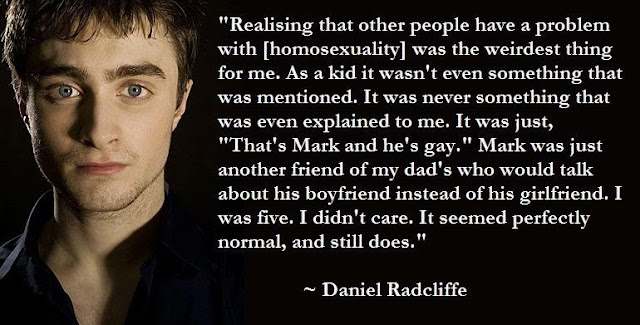 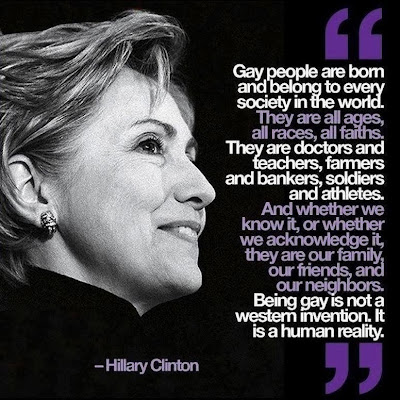 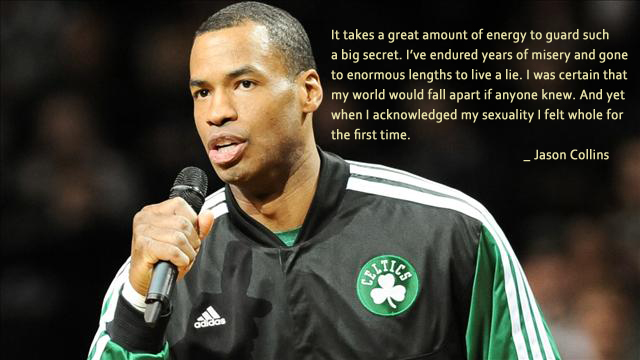 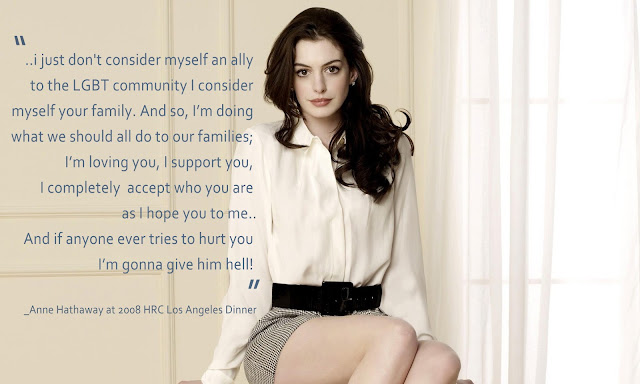 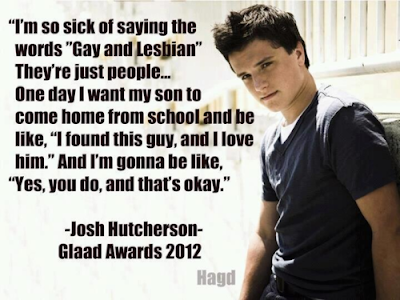 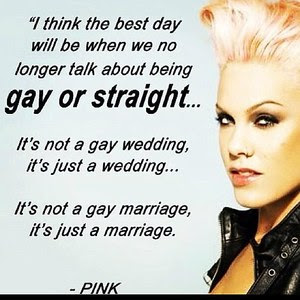 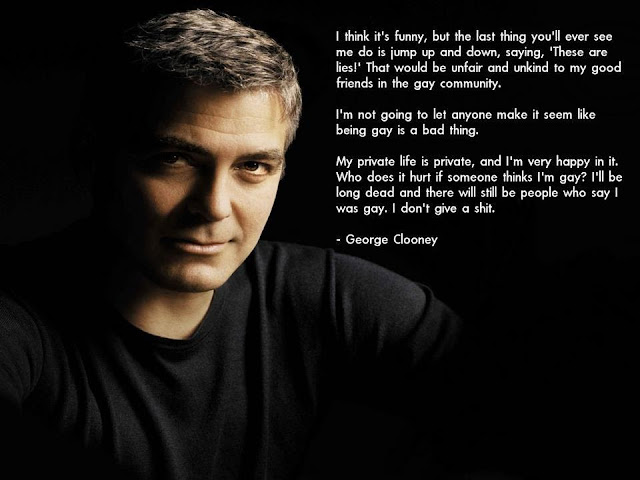 so they have spoken their thoughts, what about you? 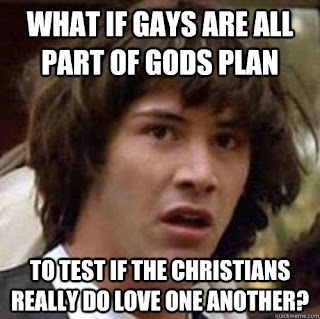